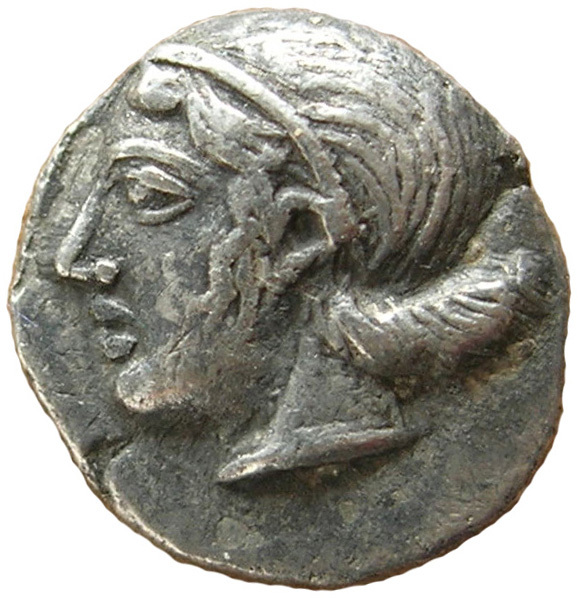 February 2022: Image and Script on the Coins of Assos

Assos, an Aeolic Greek city founded by Methymna, is certainly the most spectacular archaeological site on the northern coast of the Edremit Gulf (Ἀδραμυττηνὸς κόλπος). Some time ago, a coin from this city was already featured as our Coin of the Month, but the wealth of new types, especially among the smaller silver denominations, that keep emerging on the market make this interesting mint worth revisiting.

A small coin from a private German collection that recently entered the CN database and has been selected as the COM for February 2022 deserves particular attention. It is interesting not only for its design but also for its legend, which has continued to trouble coin dealers since this type's first appearance on the market. Over the entire autonomous period, the coinage of the city was dominated by the images of a lion; a griffin, which eventually becomes the city’s parasemon; or Athena, the city’s tutelary deity whose temple decorated the acropolis. The present coin variety that shows a female head on the obverse is certainly exceptional, prompting further studies that should ascertain her identity. On the contrary, the “three uncertain letters” on the reverse are clearly readable and identifiable. The legend AͲO, which surrounds the head of the griffin and reads counterclockwise, seems to be the first and the only attested instance of the non-Greek letter "sampi" (Ͳ), not only in Assos, but also in the Troad more generally. Used for a compound sibilant, this letter was confined to users of the Ionic script. Notably, in her book on the local scripts of Archaic Greece, Lilian Jeffery was able to name examples only from Ephesos, Erythrai, Teos, Halikarnassos, Kyzikos and Pontic Mesambria. Our COM tempts the assumption that the Aeolic alphabet, like some of the Ionic scripts, also contained the sampi – a possibility that has long been discussed, based on indirect evidence. However, the fact that in all other (earlier, contemporary, and later) coin legends of the city this sibilant is spelt by double sigma also makes likely the possibility that in this case we are simply dealing with an Ionic die engraver. Whatever the reason, this coin constitutes a highly interesting historical source, offering a good example of numismatics’ contribution to the history of ancient Greek writing.