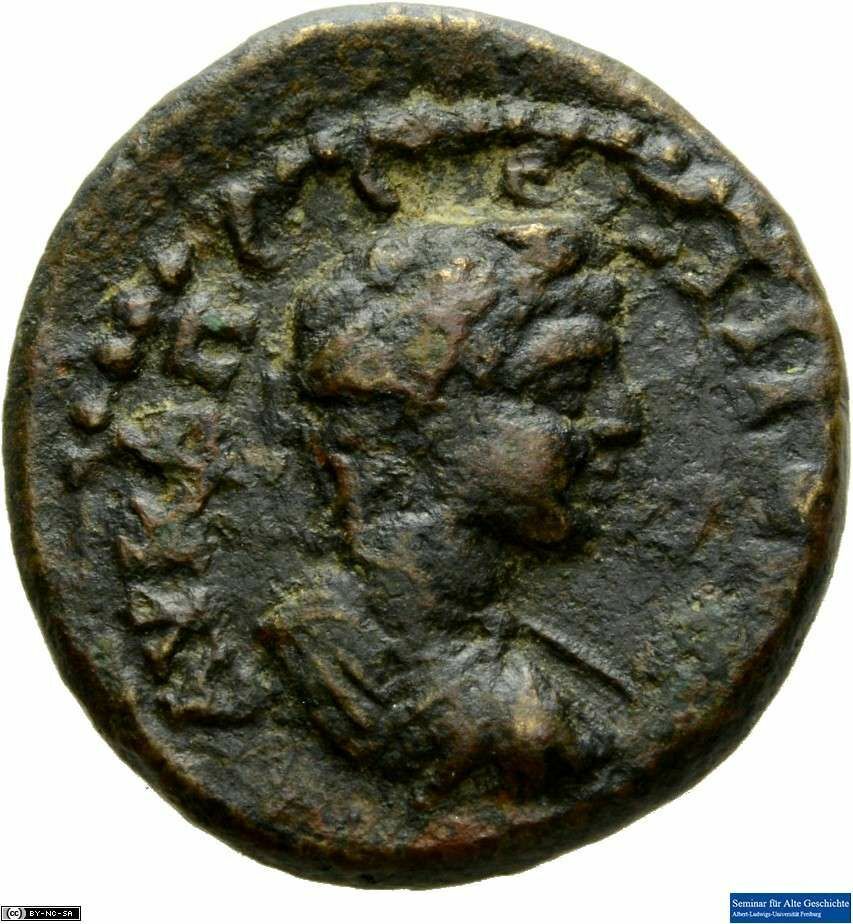 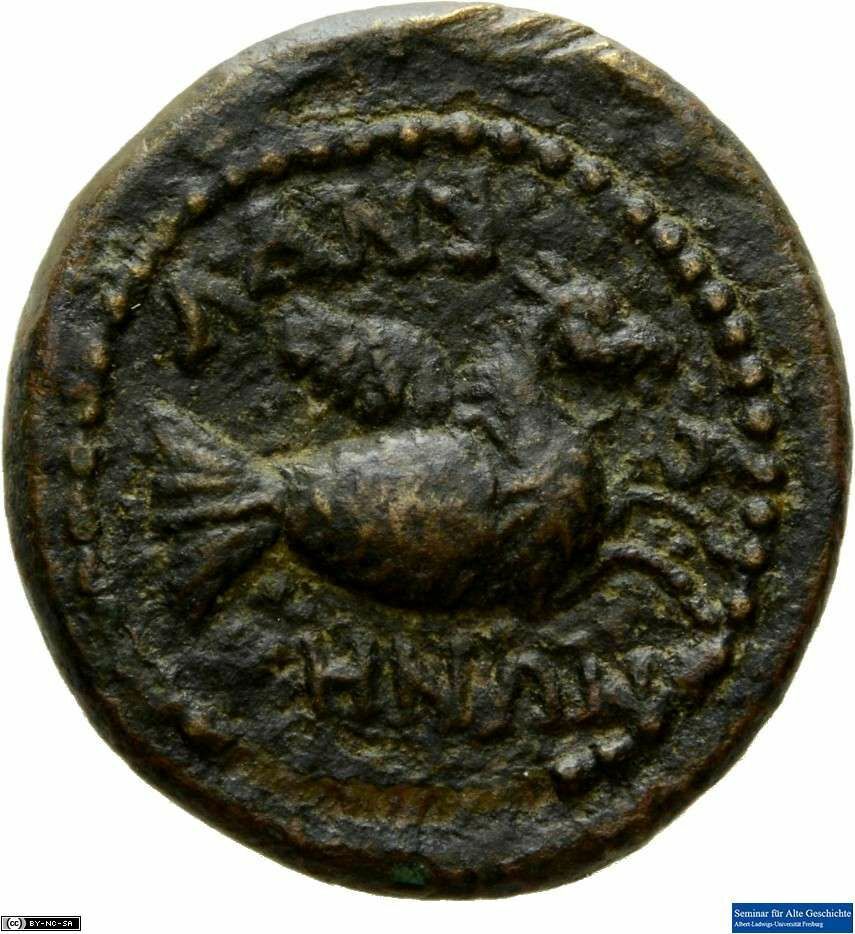 The Coin of this Month is presented by Paul Seyfried

Scholarly discussion and the mystery surrounding the parasemon of Lampsacus has continued for several centuries. The coin of the month is introduced by Paul Seyfried B.A., a student of classical cultures at the Albert-Ludwig University Freiburg i. Br.. He conceived the idea during an internship at the “Münzkabinett der Staatlichen Museen zu Berlin”.

In 1807 Théodore Edmonde Mionnet described the parasemon of Lampsacus as a „cheval marine ailé“ (a winged seahorse). This description developed most likely out of a provincial Roman variant of the parasemon as found in the coinage of Geta. Mionnet then applied this variation to the Hellenistic and classical coin types. His views provided a guideline for later generations in this regard until at the close of the 19th century when a relief of Lampsacus was discovered in Epidaurus. This resulted in Paul Perdrizet changing the course of future discussions regarding the parasemon of Lampsacus. Previously thought to be a Pegasus protome, Perdizet interpreted the relief picture as a Hippalectryon (a half-horse, half-rooster hybrid) and later as a „bird horse“. At first, this explanation did not have any impact on the general interpretation of the type of coin at hand, however, in the last decades the discussion on the parasemon of Lampsacus reignited and the Hippalectryon became a more popular interpretation (as seen in the articles by O. Tekin and P. Weiß). The parasemon of Lampsacus was also discussed by Simone Killen in her dissertation in 2012. She convincingly argued that the protome did not depict, in classical or Hellenistic times, a Hippalectryon/ bird horse or a fish horse with wings but a winged horse. The coinage of the Roman province of Lampsacus is rarely discussed, if at all, in footnotes, despite possibly being the basis for Mionnet’s interpretation of the „cheval marine ailé“. A well preserved example of imperial coinage can be found in the coin collection of the Seminar for Ancient History in Freiburg (inventory Nr.: 11678.). The 19mm bronze denomination was minted during the rule of Septimius Severus (209-211). Severus son Geta is pictured on the obverse, wearing a breastplate, a laurel wreath and looking to the right with the following legend: ΑV ΚΑ ΠΟ CΕ-ΠΤΙ [ΓΕΤΑC]. The reverse of the coin depicts a winged horse with a clearly visible fishtail, also looking right. The ethnicon of the Polis is reproduced on the legend: ΛΑΝΨ-Α//[Κ]ΗΝΩΝ [sic!]. Apart from this type of coin, there exists one other coin with the same reverse-die; on the obverse it depicts Iulia Domna, Geta’s mother (Münzkabinett Berlin, Objectnr. 18221464 https://ikmk.smb.museum/object?id=18221464).

The development towards a parasemon no longer designed as a protome has rarely been considered up until now. Until the end of Gordian’s III. (238-244) reign we know of 15 coin types which show a horse protome or a variation of the original parasemon. The winged horse remains part of the iconographic programme of Lampsacus despite the addition of further revers designs throughout the Imperial period.

But how did the early 3rd century winged fish horse come about? If we look at the 15 coin types and place them in chronological order it is clear that, at the start of Roman rule in Mysia, the mint of horse protomes continued in the city of Lampsacus. However, after the last protome coinage was discontinued during Claudius’ reign, the „classic“ parasemon of Lampsacus was only issued again around 8o years later by Antonius Pius. A substantial change to the parasemon took place during this intermittent period: The original protome disappears and metamorphoses into the portrayal of a winged horse with an abstract, funnel-like rear. Such change on its own would seem inconclusive, except that the portrayal further changes under Marcus Aurelius into a scaly, jagged growth and results in a distinctly recognisable fish tail during the mint of the Severan dynasty. Reconstructing the genesis of this transformation process is particularly challenging and, due to the lack of conclusive evidence, one that appears insurmountable. However, it is possible to suggest a few explanatory hypotheses.

The most mundane possibility would be that the population of the Polis and the engravers did not know or understand the origin of their own parasemon, which led to the modification or rather a redesign. This theory logically arises out of the 80-year period during which the mint production of the winged horse paused but there is no further evidence to support this theory.

Secondly, a further possibility could be the outsourcing of die and coin production. The idea of the separation and non-local production of obverse dies was first introduced by Konrad Kraft and then further developed by George Watson. Outsourcing might have resulted in a misinterpretation of the parasemon by the non-local engraver. However, at the time of writing, there is no evidence that Lampsacus as a Polis participated in this practice of outsourcing.

A final conjecture could be a deliberate modification of the parasemon. This may be explained as branding, an attempt to call attention to the port city of Lampsacus. The addition of the fish tail could not only reference the proximity of the Polis to the sea but also attempt to trigger associations to the Capricorn motif, which was very popular in Parium and famous since the reign of Augustus. Clearly, the population of the Hellespont would have been familiar with this image and connected it to their region.