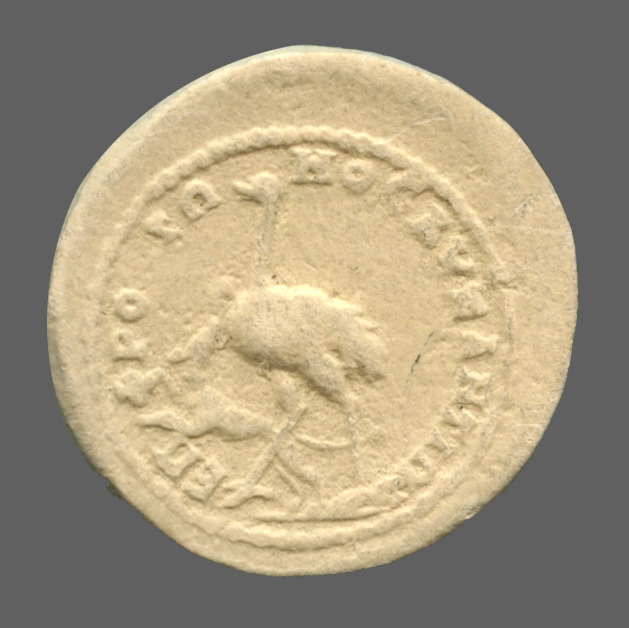 The Corpus Nummorum Team starts the year 2022 with a coin from Byzantion. We wish everyone a happy and healthy new year with this coin! The year 2022 will bring many new entries of coins and coin types in our database including the coin types from Byzantion, the diverse motifs of which we want to take a first look at with this Coin of the Month January.

This coin belongs to the so-called pseudo-autonomous coinage of Byzantion and is dated by Edith Schönert-Geiss in her monograph on the mint of Byzantion to the year 222-235 AD. The naming of the issuing magistrate, Marcus Aurelius Fronto, on the reverse helps with the dating.

On the obverse there is a portrait bust of the youthful Dionysus; he wears an ivy wreath in his hair and several curls fall loosely on his shoulders. The unusual picture on the reverse probably shows a hunting scene: a barking, snapping dog is running next to an ostrich. The ostrich, native to Africa, is an unusual motif for Roman coins. Oskar Bernhard-Imhoof sees a relationship with Egypt, as the ostrich is often depicted here. He suspects that the scene shows a staged hunting game, for which animals were imported from Roman provinces. A previous coin - also with the name of Marcus Aurelius Fronto - shows the ostrich alone. Furthermore, the ostrich is shown running fast in Thrace on coins from Hadrianopolis from the time of Gordian (CN type ID 6771 and 6762).

With this coin the Corpus Nummorum Team would like to wish all friends and supporters a successful and varied New Year!