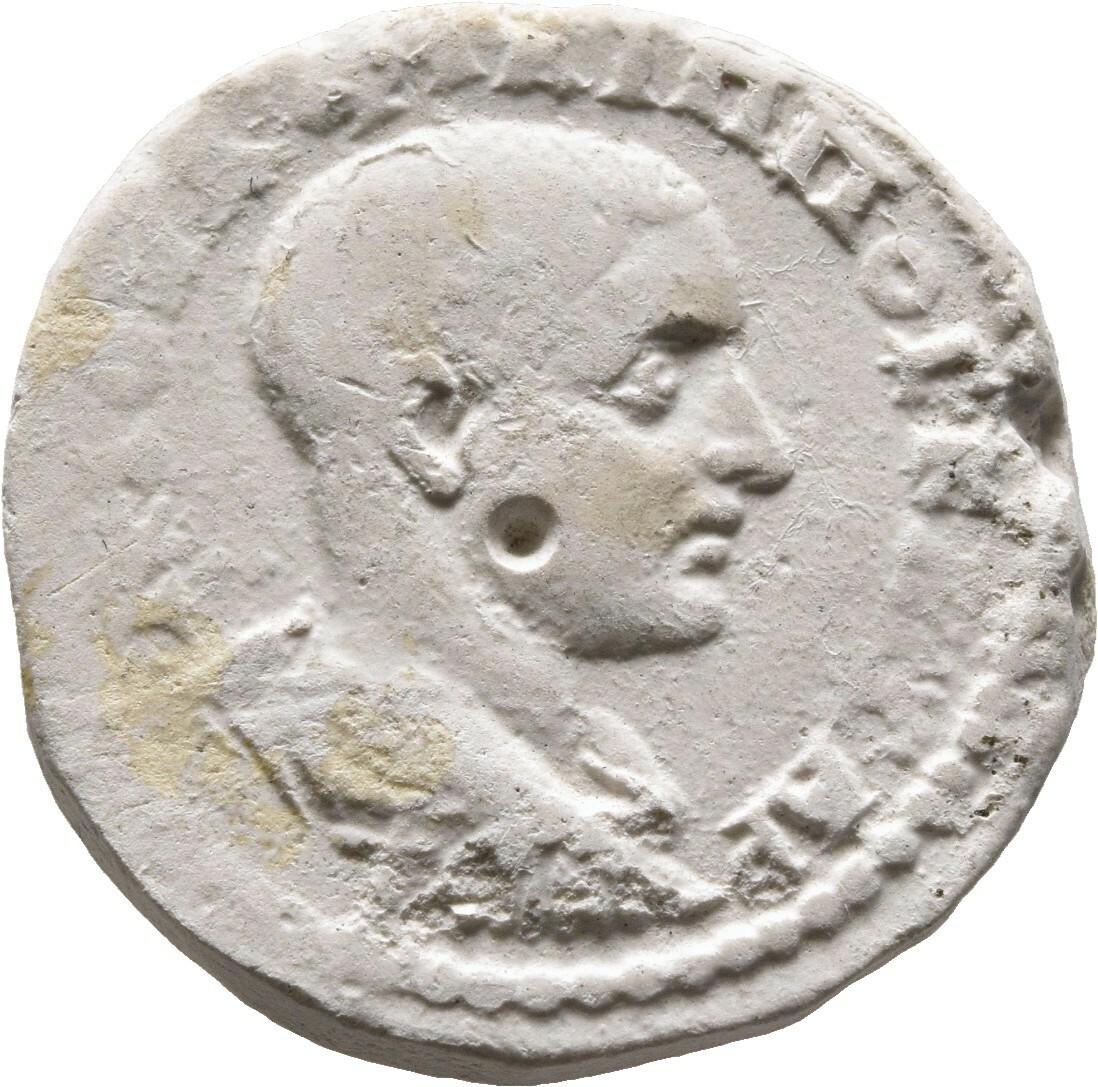 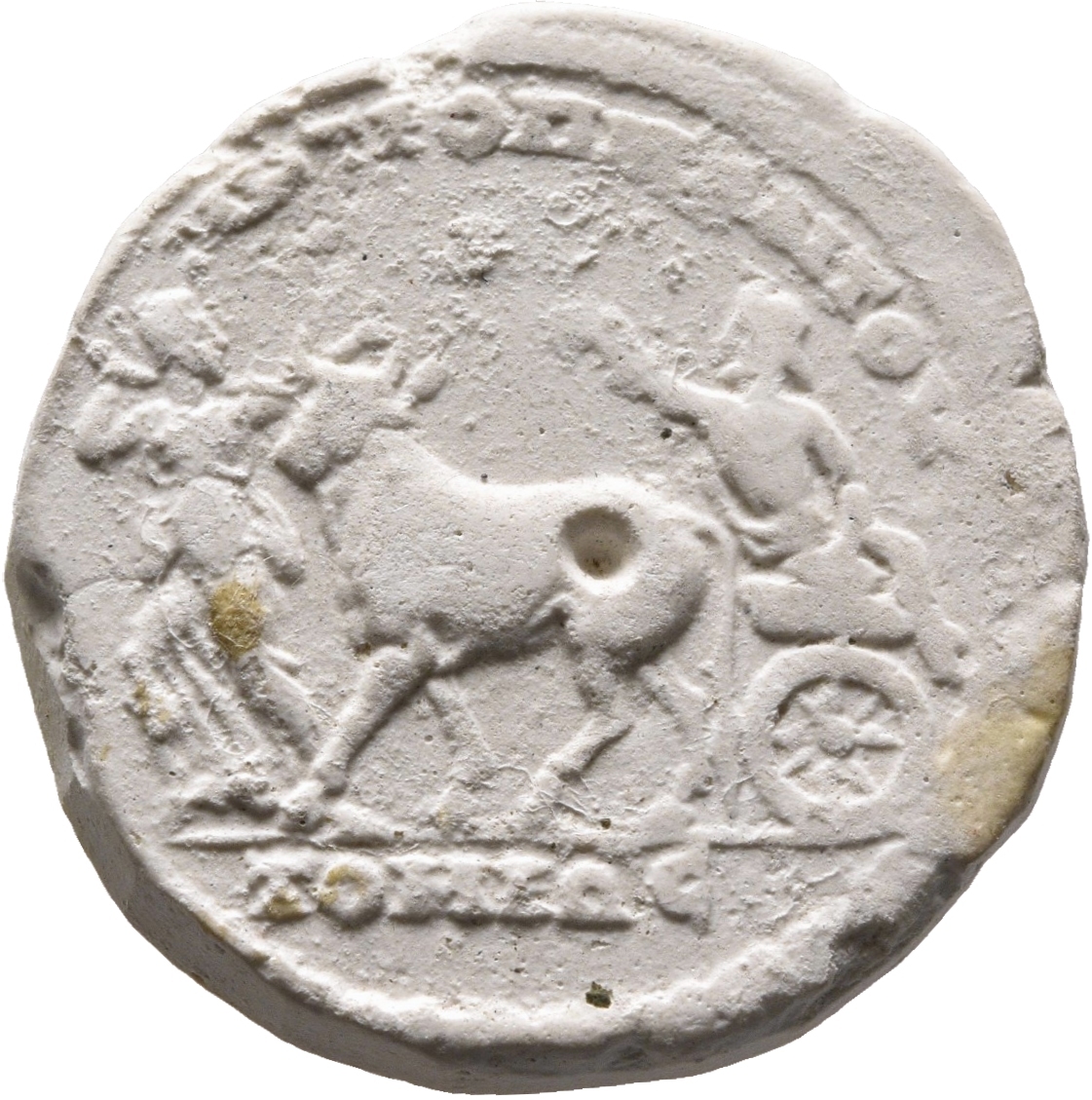 August 2021: A Patria Tradition in Tomis

This month, we present to you an enigmatic reverse type, which is attested only in the civic coinage of the Black Sea city of Tomis in Roman times. The coin image depicts a two wheeled chariot drawn by a bull. Seated in the chariot is a bearded man wearing a himation and extending his right hand, his gaze turned toward the direction of motion. In front of the bull, a clothed woman with an indistinguishable object in her right hand rushes to the left and looks back, stretching her left hand behind her.

The type first appeared under Pertinax and was then a fixture of the civic coinage under all subsequent emperors until the minting activity of Tomis ceased under Philip the Arab. Regling (AMNG I 2, pp. 629–30), who first presented a compilation of the city’s coinage, supposed that this represented a local myth, without offering any further interpretation of the scene. He refers to a similar representation on a sarcophagus relief that depicts the transfer of the sick Philoctetes to Troy. In his 2020 monograph on the coinage of Pertinax, O. Lempereur could not find a suitable illustration in the Lexicon Iconographicum Mythologiae Classicae to provide further insight into the interpretation of the coin image. However, as he points out, Renato Campo may have recently found a potential answer to this mystery (Un type énigmatique de Tomis, Bulletin du Cercle d’études numismatiques 55/1, 2018, pp. 6–14).

Campo refers to a passage in Arrian (Anabasis 2.3.2–6) with the myth of Gordias/Gordios, which, in his view, may elucidate the scene on this coin image. According to this tale, Gordias was a poor man in Phrygia who was ploughing the earth with his oxen when an eagle sat upon his wagon. As a result, he was to make a sacrifice to Zeus, which was relayed to him by a young fortune-teller, whom he then married. The Phrygians, a people who originally immigrated from the Balkans, were at odds with each other and deliberated over an oracle saying that a chariot would bring them a new king. This ended up being Midas, the son of Gordias, who travelled on his father’s chariot and thus was elevated in status to become the first king of Phrygia.

Louis Robert brought attention to two Phrygian stelae with the picture of Gordias found by William M. Ramsay that have since been lost; Campo also lists these in connection to the coin image, since they show a man in a chariot pulled by oxen. A similar stele represents the goddess Cybele, who, according to another tradition, begat Midas with Gordias. The cult of Cybele had a very significant presence in Tomis, which is also evidenced by the coinage.

As both Campo and Lempereur point out, these are all possible explanations for the inclusion of this image in the civic coinage of Tomis, but further definitive evidence for this interpretation remains to be desired. Certainly, however, the popularity of this design for many years speaks to the patria tradition of the city with which it was associated.