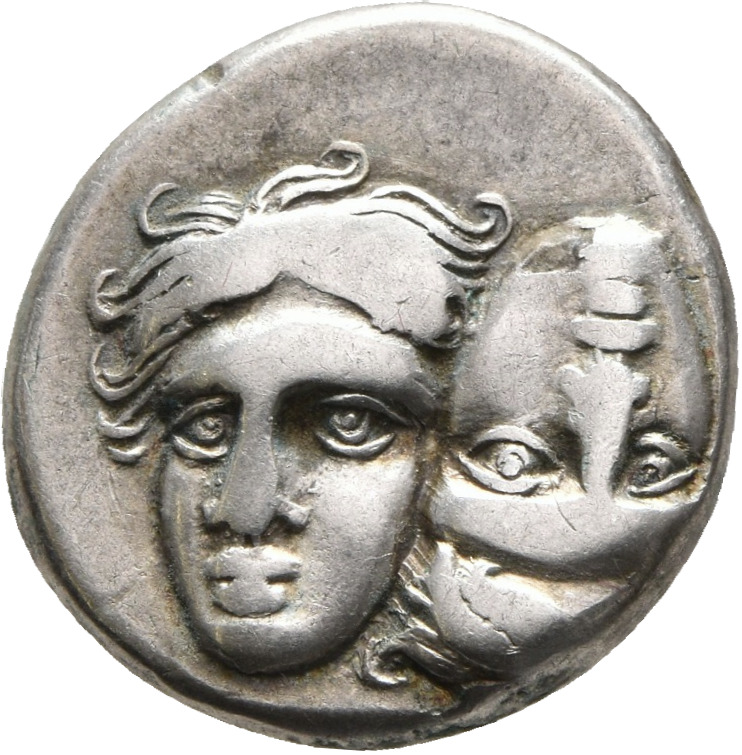 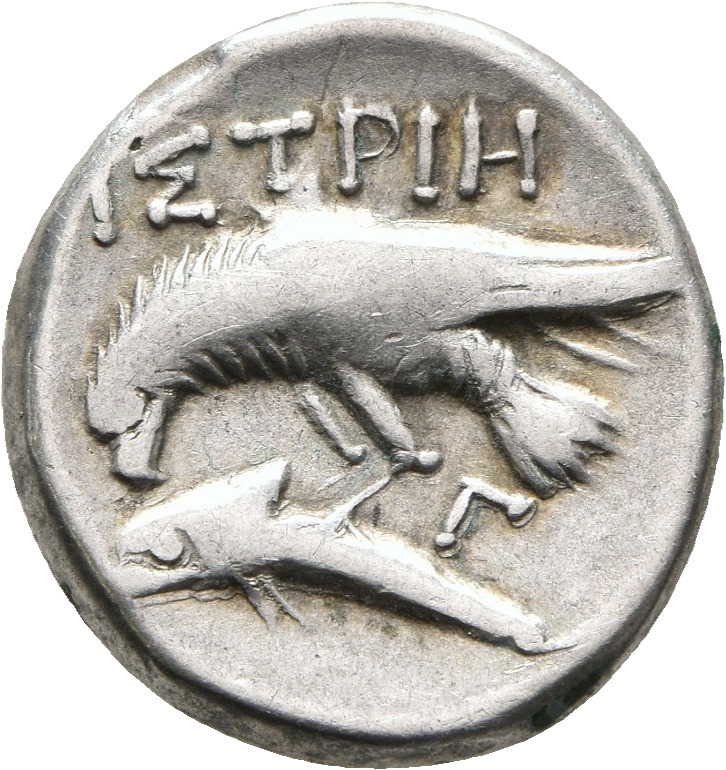 December 2021: The Antithetic Heads of Istros

On the silver coins of Istros minted during the Classical and Hellenistic periods, two antithetic young male heads with curly hair are depicted on the obverse. The reverse sides of these drachms and trihemiobols feature the city's municipal coat of arms: the eagle above a dolphin, which is an image that the other two Milesian daughter cities on the Pontos—Sinope and Olbia—also used for their coinage. The obverse motif of these abundant coins, which were minted for decades, is singular. A satisfactory or convincing interpretation, however, of what these two young men's heads represent has not been found to date.

As early as 1658, Isaac Vossius argued in his treatise on Pomponius Mela's "De situ orbis" that the two antithetic heads possibly symbolize the two opposite mouths of the Istros, today's Danube. Since the 4th century BC, ancient geographers disagreed about the course of the river. Several authors assumed a division of the Danube at its upper course. They were of the opinion that one branch of the river would flow into the Adriatic Sea, while the other would flow into the Black Sea (Skyl. c. 21; Theop. fr. 140 et al.). However, Strabo (I 3, 15) and Diodorus (IV 56) had already recognized that the Danube did not bifurcate, but that the shared name of a larger River Istros, which flows into the Black Sea, and a smaller one on the peninsula of Istria had caused this confusion.
The two heads have also been interpreted as two different winds; as the rising and setting sun; as the Dioscuri, who, according to Homer (Od. XI 302–304), alternated between Olympus and Hades; as Cabeiri;  as local gods of the Getae and so on. In comparing the amphorae on the coins of Thasos—also placed antithetically—and the silphium plants on the coins of Cyrene, which referred to the export products of the poleis, J. Hind theorized that the two heads on these coins may have symbolized the slave trade by which the city made its money, and that the roughness of the faces would mark the men as the barbarian Getae. Another recently expressed interpretation associates the two heads with a possible Istrian solar eclipse that occurred in the 5th century BC.

Even though a convincing and conclusive explanation has not yet been found, we are nevertheless pleased to present this coin type from Istros as the Coin of the Month for December 2021.