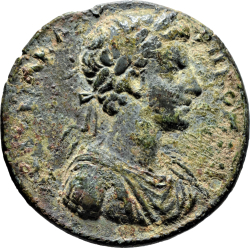 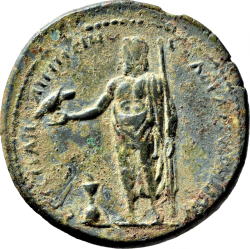 November 2021: Zeus as a Tutelary Deity of Adramyttion

Here, we see a well-known statuary type of Zeus, but with an unusual depiction of an eagle. This is what the cult image of Zeus of Adramyttion could have looked like.

Zeus as a tutelary deity of Adramyttion appears as a coin image during the earliest phases of the city's civic coinage. Yet, it is not until the Roman imperial period that he is depicted as a figure. During this time, the motif becomes popular, being used time and again until the cessation of the city’s coinage in the mid-3rd century AD.

On this coin, Zeus is shown facing, in a slightly contraposto stance.
He holds a long scepter in his left hand and an eagle in his outstretched right hand. The deity is wearing a himation, which is wrapped around his waist and falls over his left shoulder. The various coin images are evidently based on a single statuary type, a facing image in the Classical or Classicizing style. Whereas a sculptural version of this Zeus type with a himation, a scepter, and an eagle remains unknown, the type of a standing Zeus Aetophoros on gems and coins is generally well attested. There, the eagle is usually shown sitting in Zeus’ direction or turning his head towards the god. However, what makes the image of Zeus on the coin of Adramyttion special—and possibly also unique—is that the eagle is looking forward, over the hand of Zeus. This coin image seems to hint at a statuary prototype which, with its peeking eagle, exhibits individual city-specific features. A temple of Zeus with a cult statue of such an appearance can thus be postulated for Adramyttion.

Two other coin types emphasize the importance of Zeus as a polis deity. Under Septimius Severus, there is a coin with the portrait of Caracalla, the reverse of which shows Zeus being crowned by Nike. The statue of Zeus also represents the city on its Homonoia coins with Ephesus dating to the time of Caracalla. The archaic cult image of Artemis from the Ephesian Artemision contrasts markedly with the Classical/Classicized cult image of Zeus from his temple in Adramyttion. The unusual depiction of the eagle can perhaps be explained by the role of Zeus in the founding of the city. Zeus sent his eagle, as it is shown on other coins, to show the city founder, Adramys, the location of the settlement to be founded.