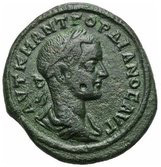 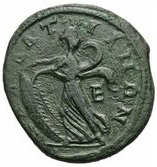 My daughter Levke, who got a chance to see much more of my work due to the shutdown, noticed once, looking over my shoulder: “I thought coins showed rulers and statues of gods. But this coin image appears moving and almost dynamic. And what does the figure hold in its hand? Are these fishing nets? Since when have Roman emperors minted fisherwomen on their coins? Aren't you working on Greek coins?"

Her gaze fell on one coin of Gordian III struck in Kallatis, today's Mangalia on the Romanian Black Sea coast. Founded in the 6th century BC by the Greeks from Herakleia Pontike, the city minted coins both in the autonomous period and under Roman rule.

The reverse of this imperial coin pictures not a fisherwoman, but Isis, with a lotus flower in her hair, walking to the left and holding a wind-filled sail in her hands. The type is known already under Commodus and Septimius Severus, but consistently shows the goddess turned in the opposite direction. Isis was widely worshiped by the Greeks as the protectress of navigation and was given the corresponding cultic names, such as Euploia ("ensuring a good voyage"), Pharia (after the famous Isis sanctuary on the lighthouse island of Pharos), and Pelagia ("marine"). Under Septimius Severus, Kallatian coins also show the bust of Isis. The city’s necropolis has also produced some bronze objects related to her cult. Along with Kallatis, Tomis is the only city in Moesia inferior that minted Isis types, although not the type with the sail. Yet this type is well attested further south in the cities of the Thracian coast, such as Anchialos, Byzantion, and Perinthos, as well as in Philippopolis situated inland on the Hebros River. In the latter case, this type possibly indicated the navigability of the Hebros in antiquity.

From Septimius Severus on, the provincial coins of Kallatis bear denomination marks. On the Gordian / Isis type presented here, we see the symbol of the highest denomination: E.