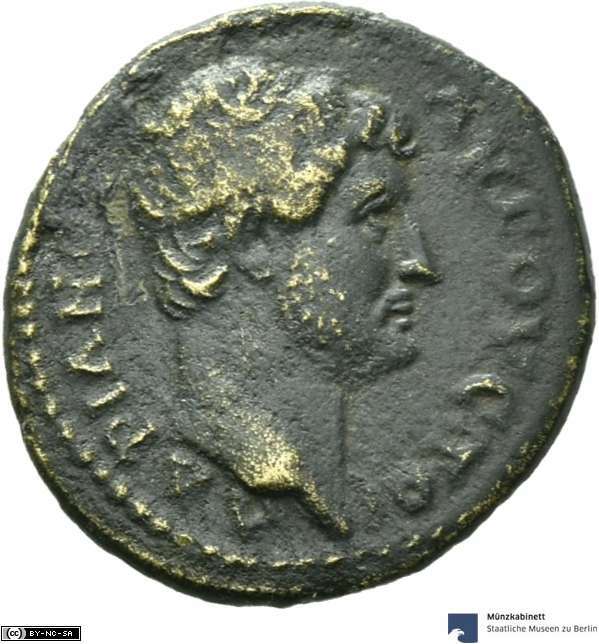 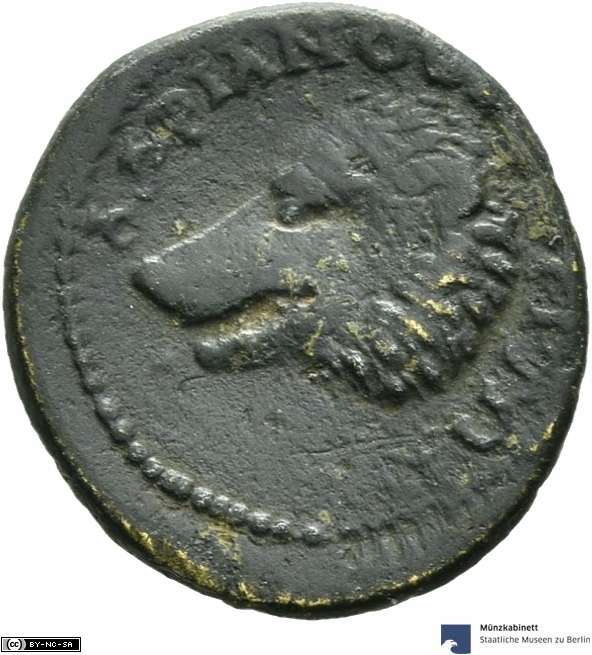 In the winter semester of 2019/20, Prof. Dr. Bernhard Weisser conducted a seminar on the coinage of Mysia at the Winckelmann Institute of Archaeology, Humboldt University, Berlin. This seminar made use of the e-NUMiD Project, developed by Prof. Dr. Johannes Wienand at the University of Düsseldorf. Among other tasks, participants entered coins from the city of Hadrianotherai into the interactive catalogue of the Berlin Numismatic Collection. Student Stefanie Börnicke was responsible for the entry of this month’s coin, and wondered both why the bear’s head on the reverse was identified as that of a female bear, and how the name of the city could be explained.

Hadrianotherai is, along with Hadrianoi and Hadrianeia, one of the three cities founded by Emperor Hadrian during his journeys through the landscapes of Mysia. The foundation of Hadrianotherai is mentioned in the Historia Augusta 20.13, as well as by Cassius Dio in his Roman History (69.10.2), where it is associated with the emperor\'s passion for hunting. He had hunted successfully in the surrounding wooded area and, as the Historia Augusta tells, killed a she-bear (as indicated by the feminine form ursa=Bärin: “ursam occidisset aliquando”).

\r\nThe city of Hadrianotherai was founded in about AD 124 during Hadrian\'s first journey through the province of Asia. Its likely location is associated with modern-day Balıkesir in central Mysia, at the junction of the main N-S route between Kyzikos and Pergamon and the road leading from the harbour of Adramyteum to the country’s interior.

\r\nCoinage from this city is documented from the Hadrianic period until the middle of the 3rd century. It is particularly interesting that the reason for the city’s foundation is reflected in its coinage. Other than the depiction of the emperor on horseback during the bear hunt, there exists the type of bronze coinage shown here, three specimens of which are kept in the Numismatic Collection. The obverse features the head of Emperor Hadrian with the legend ΑΔΡΙΑΝΟϹ ΑΥΓΟΥϹΤΟϹ, while the reverse shows the head of a bear with a slightly open mouth and the legend ΑΔΡΙΑΝΟΘΗΡΙΤΩΝ (type; coin). In addition, there is another type that shows the bust of Antinous on the obverse and the head of the same bear on the reverse with the meaningful legend ΑΔΡΙΑΝΟV ΘΗΡΑ (Hadrian\'s hunt, θήρα = hunt).