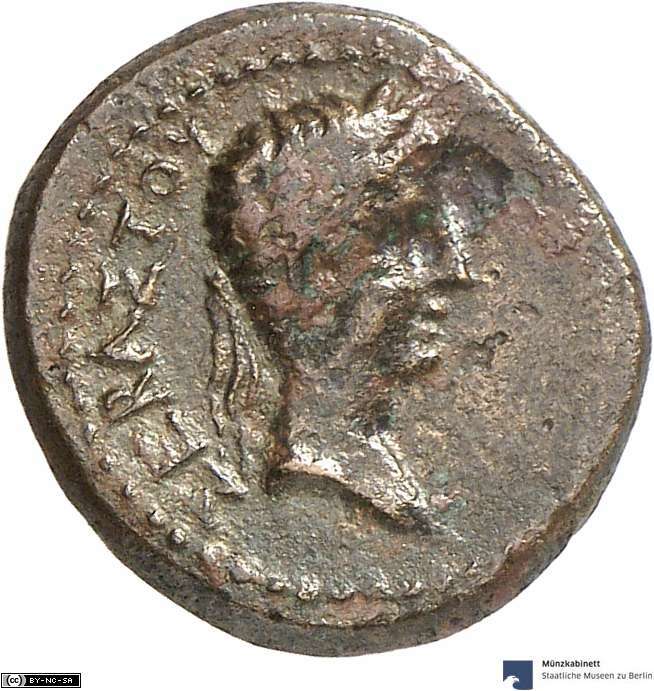 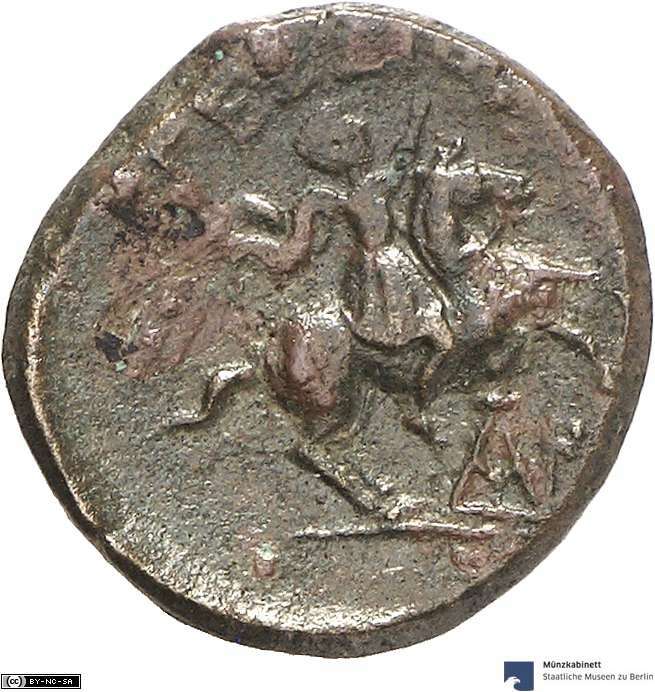 November 2020: Adramyttion - Who is the Horseman?

He rides along on a galloping horse, armoured and wearing the pteryges. His cloak (chlamys) is blown about as a result of his quick movement, and his right hand is raised in greeting. Who is this horseman represented on the reverse of an Augustan emission from Adramyttion, a specimen of which we see here from the Berlin Coin Cabinet (Staatliche Museen zu Berlin)?

This horseman differs from other depictions of a person atop a galloping horse, by the position of his arm raised in greeting. This is the adventus gesture, known from coin depictions of the imperial period where the emperor greets the inhabitants of the city atop a proudly striding horse. Are we dealing here with an adventus depiction of Augustus, who is pictured on the obverse? The Augustan issues of other cities offer no parallels to this coin.

We find a corresponding rider on coins from the geographic vicinity on coins of Kisthene (cn.cisthene.3421) and Elaia, which can be stylistically dated to the 4th century BC. In Adramyttion, the horseman can plausibly be connected to the eponym of the city – Adramys, the son of a Lydian king. While only scarce documentation of him exists, he is associated with the peak of Lydian rule. According to Nicolaus of Damascus, he was a lesser son of Sadyattes and a half brother of Alyattes, but Stephanus of Byzantium asserts that he was born one generation later and was a brother of Croesus.

The Bay of Adramyttion constituted a northern border region for the Lydian kingdom. The prosperous bay, its port, and the adjacent Ida Mountains were apparently so important that a member of the royal family was installed there for its military protection. At the same time, this removed a potential competitor for the throne from the centre of power in Sardis. The inhabitants of Adramyttion knew Adramys as a military commander. The city later served as a military base for the Persians, the Macedonians, and also the Attalids. Thus, the depiction of Adramys as an armoured horseman would have been iconographically appropriate during the Hellenistic period. The nearby city of Alexandria (Troas) referred to Alexander the Great as its city founder. With Adramys, Adramyttion could refer to an even earlier founder.

Let us now return to the Augustan coin, which the magistrate Gessios Charidemos issued for Adramyttion. Adramyttion was situated nearby the bigger city of Pergamum. The minting authorities of Pergamon had decided to concentrate their entire minting programme on the Emperor Augustus, the allocation of the first imperial cult temple in Asia Minor to Pergamon, and the members of the imperial house. Gessios Charidemos, on the other hand, had coin images previously used during the Hellenistic period combined with the portrait of Augustus. The larger denomination shows the polis deity, Zeus (cn.adramyteum.3120), while the smaller one depicts the horseman with the raised right hand. It is very doubtful that Augustus' features can be discerned in the tiny rider's head. However, it is likely that an association with Augustus was desired. After the terrible civil wars of the first century BC, which had also affected Adramyttion, there was finally a new ruler who promised peace and renewed prosperity. Augustus could be seen as the new city founder of Adramyttion; this form of ruler panegyric could thus be conveyed by minting coins with the horseman Adramys/Augustus.