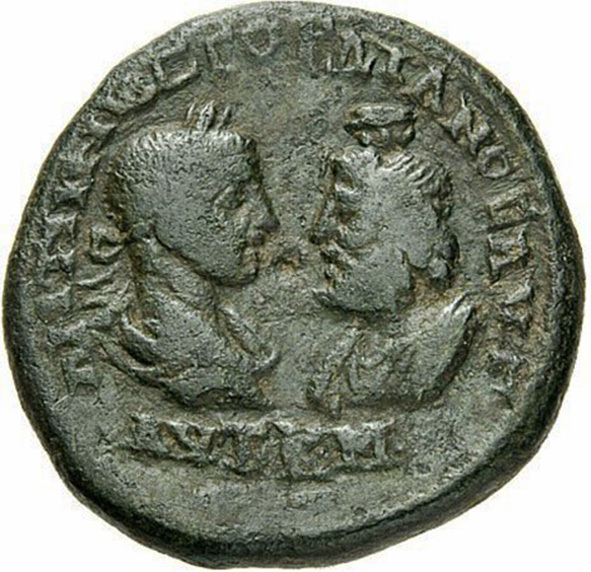 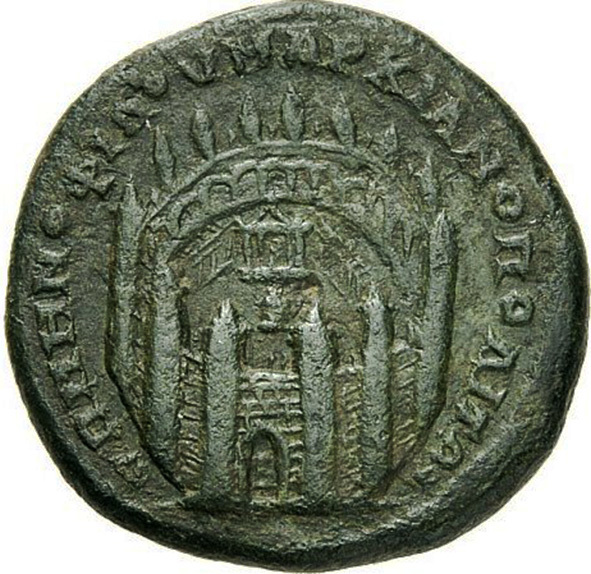 The city of Marcianopolis was founded by Trajan, who named it after his sister, Marciana. It was situated on the road leading north from Anchialos over the Haimos (Balkan) Mountains. This road forked at Marcianopolis, from which a western road ran to Durostorum on the Danube, and an eastern one led to Odessos on the Black Sea. The ruins near the modern Bulgarian village of Devna consist of a polygonal perimeter wall that once surrounded the city. This wall is represented on coins minted under Gordian III. The obverse depicts the confronted busts of Gordian III and the god Sarapis, who was popular in the third 3rd century. The emperor is cuirassed and wears a laurel wreath, while Sarapis with the kalathos appears as comes Augusti of the emperor. A previous Coin of the Month (https://www.corpus-nummorum.eu/coinOfMonth?year=2018&month=3) also features this peculiarity of some Thracian and Moesian mints, which display Gordian III or Philip II together with Sarapis on the obverse. The reverse image is a spectacular bird’s-eye view of the city. The earliest known example from Bucharest, described by Berendt Pick in the first catalogue of Marcianopolis coins “Antike Münzen Nordgriechenlands”, has been augmented by recent specimens that have appeared in commerce. They clearly show the thirteen towers of the city wall and a four-columned temple with the cult image of a deity within. Two columned halls flank the temple, and a burning altar appears in the middle of the scene. In the open archway, the nominal sign \"E\" can be seen, which identifies the value of the coin as belonging to the denomination of five units.
\r\nThis coin image propagates the beauty of the city on the one hand and its defensive strength on the other. This would have been particularly important during this time of military turmoil, with the looming wars in the east and, above all, the invasions of the people from the north across the Danube to the provinces of Moesia Inferior and Thrace. We know of a similar coin image of the subsequent emperor, Philip the Arab, from Bizye (https://www.corpus-nummorum.eu/coinOfMonth?year=2018&month=7). The coin of Marcianopolis was issued under the governor Tullius Menophilus, who successfully fended off attacks of the Goths and Carpi in Moesia Inferior and renewed the walls of the city.