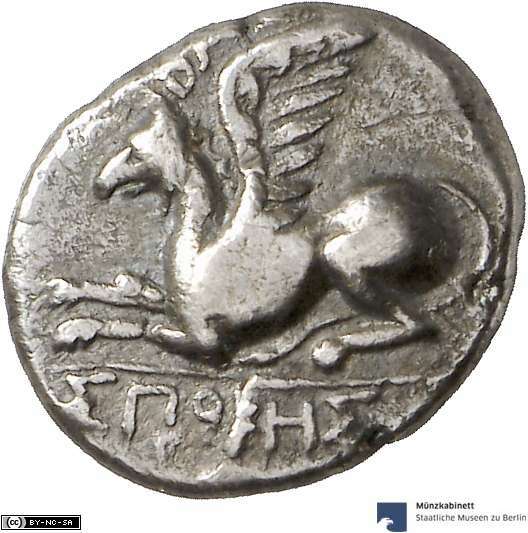 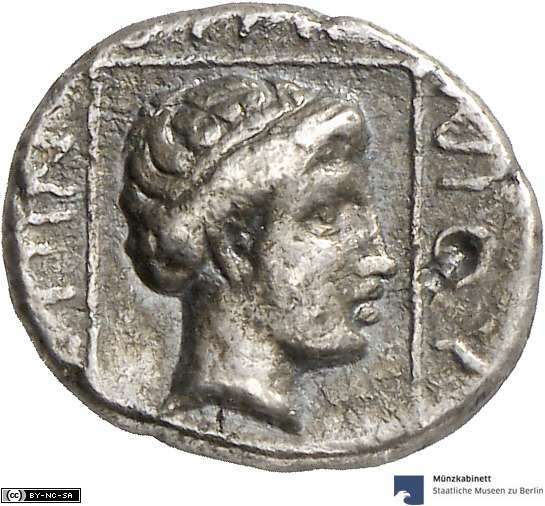 For this month, we have chosen a unique coin type from the Berliner Münzkabinett. This silver coin was minted in ca. 360 BC (or perhaps between 336 and 311 BC) during the dynasty of Spokes, a ruler who is known only through his coinage. It is believed that the Thracian city of Abdera was also the mint for coins of this Thracian dynast. In the literature it has been suggested that he minted his coins nearby or directly in Abdera and that he used the civic workshop as his own. This single emission was explained as a reflection of a rivalry between Abdera and Maroneia, or possibly as a testimony of the friendship between Abdera and the Thracians.


This dynast is of particular interest to Abdera's history, as he struck silver coins that took over the motifs featured on the city’s coin types. The iconography used corresponds exactly to that of Abdera’s silver coinage of the 4th century BC. On our coin, the characteristic obverse symbol of the city, the griffin, appears lying left with a closed beak and his tail tucked under his hind legs. In the left field above the griffin’s feathered wings, we read the letters BA, while the name ΣΠΟΚΗΣ is written in the exergue. Spokes is characterized by the king’s title, ΒΑΣΙΛΕΥΣ, and his name, which suggests the new minting authority, occupies the place that traditionally belonged to the name of the issuing city. This tradition of bearing the king’s title can be traced far back among the dynasties in southwestern Thrace. The obverse shows the laureate head of Apollo to the right, within a linear square and surrounded by the magistrate’s name, Noumenios (ΕΠΙ ΝΟΥΜΗΝΙΟΥ). It is very interesting to note that the name of Noumenios also appears on coins of the VIII Period in Maroneia (dated ca. 365-330 BC). It is possible that our Noumenios is identical to that of Maroneia, but his name is not attested in Abdera’s civic coinage.