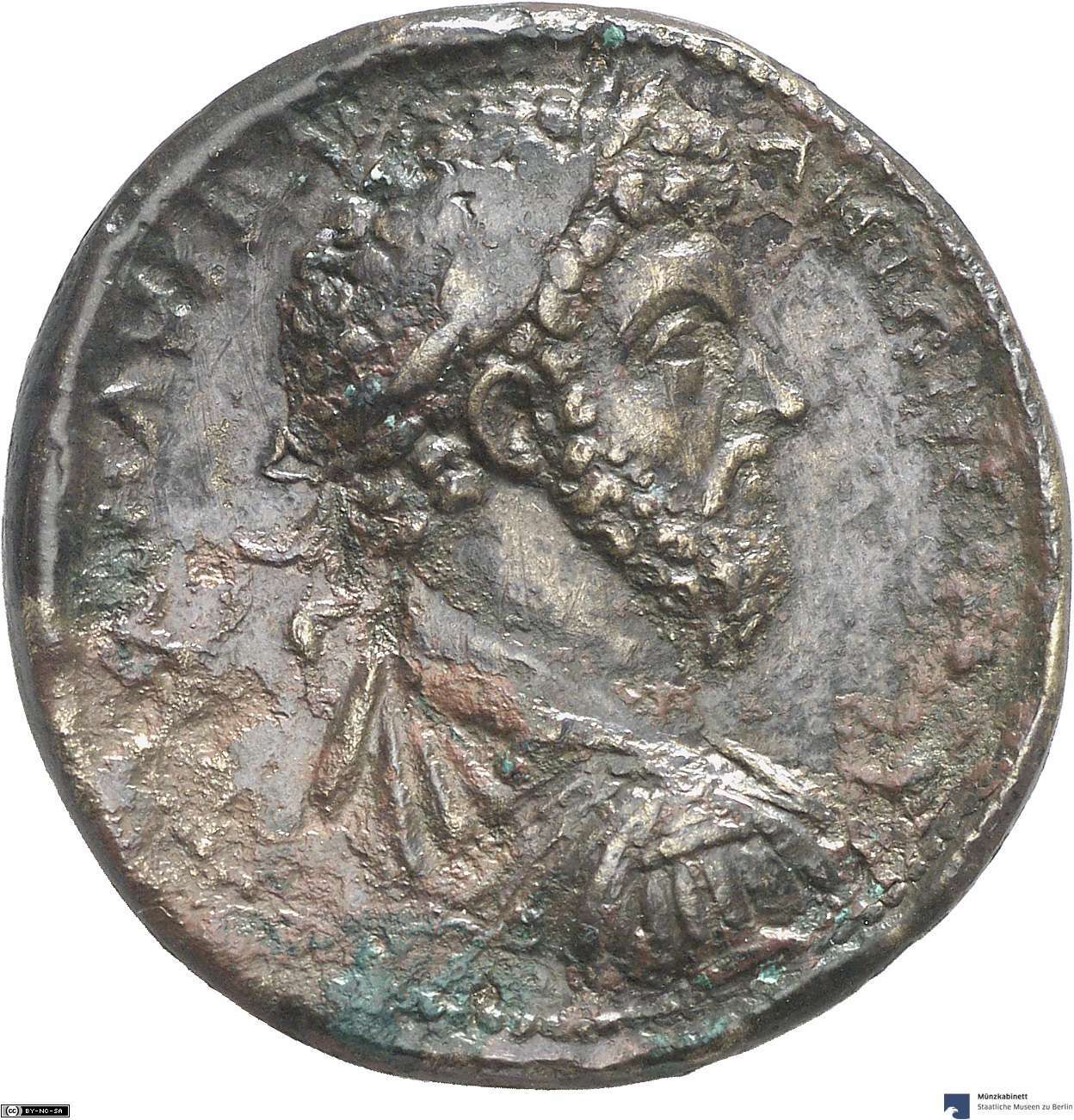 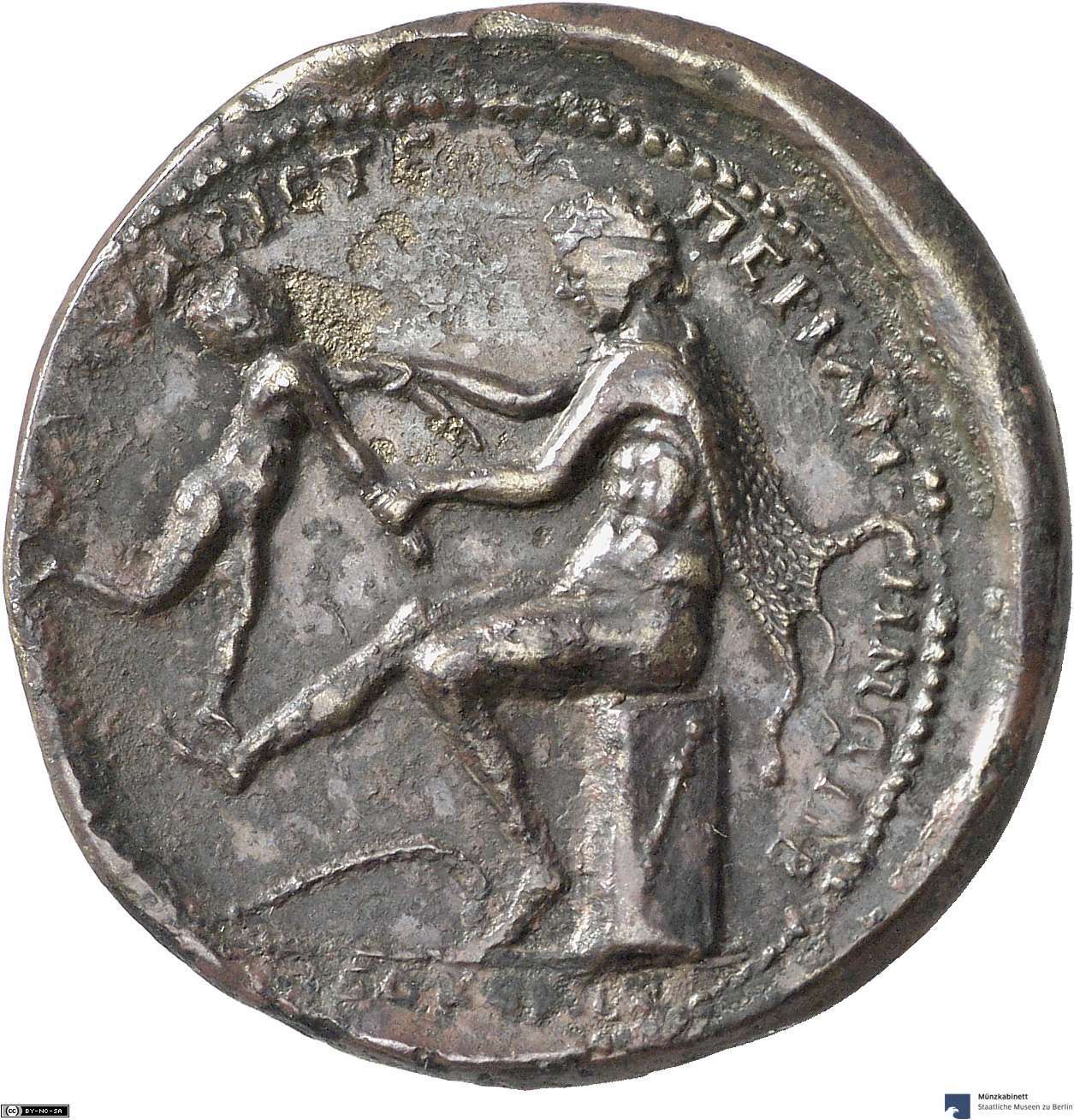 The Coin of this Month is presented by Bernhard Weisser

Summer means holidays, and one of the greatest joys for every child is an adult playing with him or her. In fact, children can’t get enough of being spun around or being carried around on their parents’ backs. On a Pergamon coin from the time of Marcus Aurelius (161-180), an adult satyr balances and rocks a young satyr on his right foot. The adult satyr is seated on a round block and holds the young satyr by his left wrist and his upper right arm, which are stretched out.

The coin shows a game which can be played anywhere. It was just as popular in ancient times as it is today. But adults in roman times didn’t want to be portrayed in such every-day situations, perhaps because they didn’t think such representations prestigious enough. Iconographically, similar images can only be found on cameos, beginning in the Hellenistic time; a genre of very personal and private memorials.

Also starting during the Hellenistic period, statues where put up outdoors, which where tailored for a specific landscape. For example, a statue of a sleeping satyr could be found in a cave, a statue of an old drunk woman in a large wine barrel on the roadside, a statue of a fisherman on the edge of a pool, or a satyr and a maenad having fun. Contrary to the “viri illustres” statues, these did not function as role models. Their function was, rather, to astonish the viewer through their seemingly natural presentation, to create a make-believe bucolic setting, and to amuse in a dramatic or delightful way. The “heroes” of these scenes were farmers, fishermen, beggars and prostitutes, all of whom the viewer felt emotionally removed from - just as removed as they felt from the satyrs and maenads of the mythical world. Also, the excitement around Dionysus made room for funny or crude compositions.

The depiction of a genre scene on a coin is surprising since most coins representing their issuing cities showed a limited range of motifs: images of the gods and their surroundings. On Pergamon coins, Dionysus is portrayed in a representative way, though without detail. He does not play an exceptional role within the overall image catalogue of Pergamon coins. The reason the genre group is shown on the coin at hand must be found elsewhere.

From the first to the middle of the third century, Greek cities used coins for self-praise in an unrivaled way. Next to presenting the gods of the city, a long-practiced feature, they also showcased many other things on coins to pride themselves with. By including references to famous and high-quality sculptures, such as Aphrodite of Knidos, next to cults, heroes, personifications, architecture, games and titles, the city emphasized its importance and significance. For contemporary authors like Pausanias and Philostrat, the appeal of cities was also based on the existence of famous sculptures, thus they became the first “Meisterforschung” (the quest for the masterpiece) scholars.

With that in mind, the group of an adult and a young satyr, for the people of Pergamon, had to represent a “Meisterwerk” worth displaying on a coin. And just how important this sculpture must have been for them is shown by the fact that yet another coin bearing a similar image was emitted under Commodus. Choosing this image was not “just an idea” of the die engraver, thereby producing an isolated individual coin type. The sculptural group, originally probably a Hellenistic sculptor’s work of Pergamon, was very likely admired during the second half of the 2nd century in a sanctuary of the city.