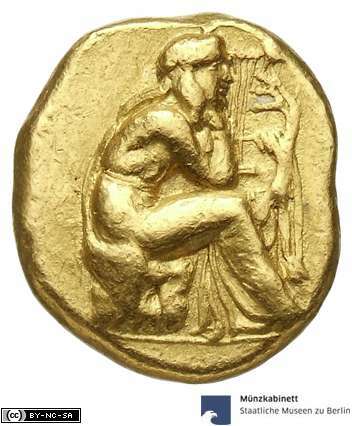 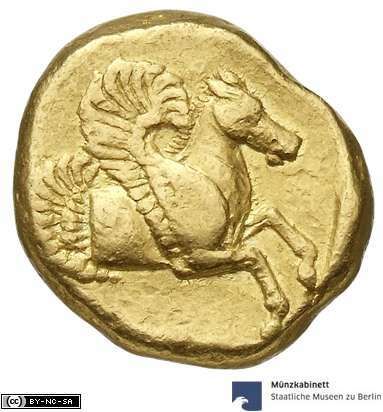 Lampsacus, located in the very north of Mysia, on the eastern side of the Hellespont, produced coins from archaic times to Gallienus. Among the finest is a group of gold staters from the 4th century B.C., which all show the same motif on their reverse: a winged horse protome. This motif was the official symbol of Lampsacus and can already be found on the city’s earliest electrum coins. In 1924, Agnes Baldwin presented a comprehensive study about the gold staters of the 4th century B.C. She identified 140 coins and differentiated 41 types. The obverses show heads of Olympians next to other mythical figures, such as Pan, Kairos, Nereide and Maenad. Also different mythological scenes can be found, e. g. Helle on a ram or Heracles wearing a woman’s garment. Next to Cyzicus’ electrum, the gold stater of Lampsacus was a popular currency used in the Greek territory. On average it weighed 8.4 g, which corresponds to the weight of the Persian daric. Its value is referred to by inscriptions as “golden stater of Lampsacus”. But open questions remain. Are they a city coinage or are they coins of the Persian satrap who provided the metal? Who profited from the seigniorage? At the moment, a new comprehensive die study is being conducted by Peter van Alfen. The obverse motif shows the Thracian singer Orpheus. Dressed in a long coat and wearing a Phrygian cap, which to the Greeks meant he was an oriental king, he sits to the right on a rock. Deep in thought, he rests his chin on his right hand, while he holds a lyre in his left hand, which was given to him by Apollo, God of music and song. Orpheus was regarded as a mesmerizing singer. His voice not only moved the Gods but also wild animals, who would flock around him. Even rocks supposedly cried and trees tilted toward him. Orpheus represents the power of music, which is able to overcome the imperfection of immortals, even to conquer death. It is with this piece that the Berlin coin cabinet starts its Mysia project within the Corpus Nummorum. The greetings of Orpheus over the landscapes show that there were manifold relationships between Thrace, Mysia and Troad.