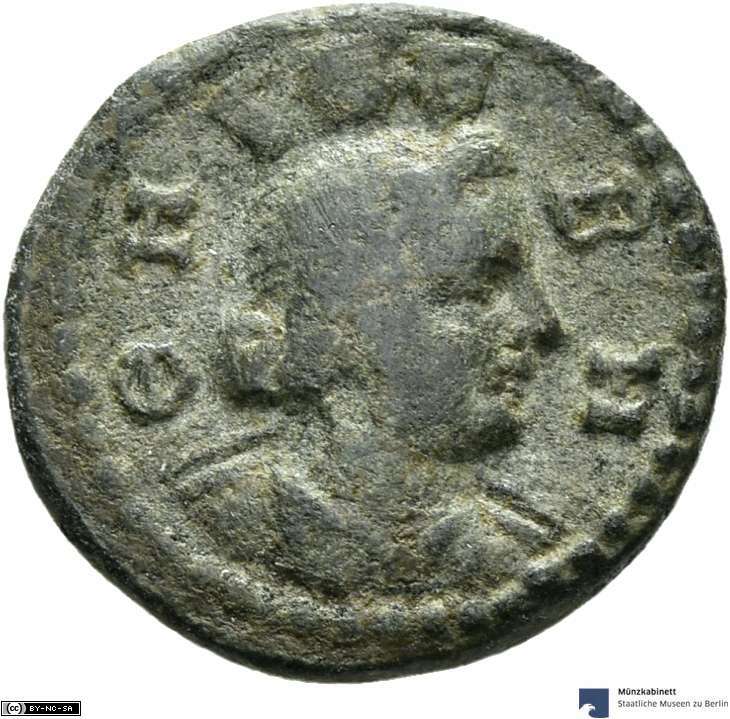 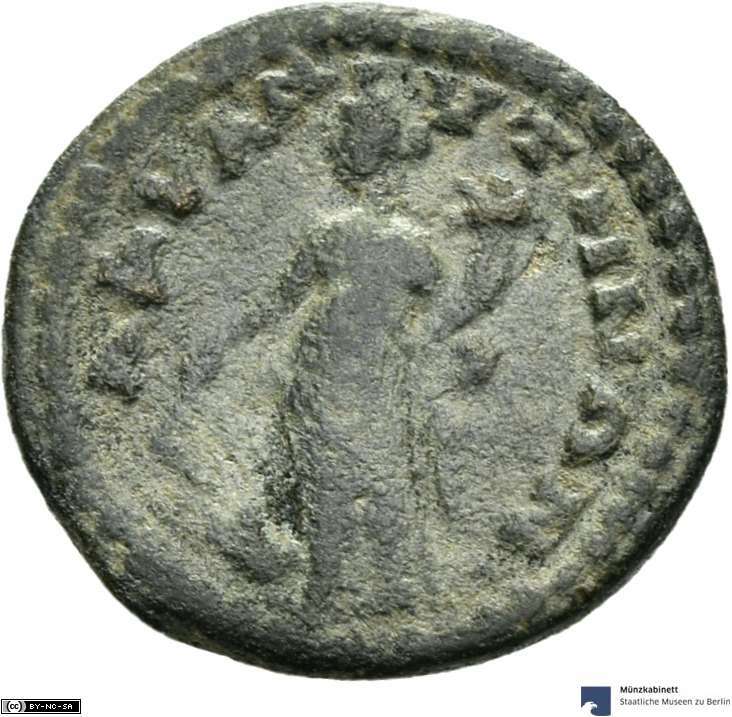 South of Mount Ida the bay of Adramyteum cuts deep into the countryside. The southern stream of Mount Ida, the northern streams of the Kozak mountains and the Euenos with its tributaries water this fertile plane. Literature calls it “Plane of Thebe” or “Bay of Ida”. The ancient main harbor town Adramyteum is located in the area of present day Ören.
Adramyteum‘s coin production started in the 4th century BC and stretches with disruptions to the time of Gallienus (253-268 AD). The shown pseudo-autonomous bronze coin is attributed to Adramyteum and is located at the Berlin coin cabinet. It has a diameter of 21 mm and weighs 5,02 g. On the obverse, just as the legend ΘΗΒH spells it out, it shows the bust of Thebe, her head turned to the right. The city goddess’ hair is bound together in her neck with a lock of hair over her shoulders. She is wearing a three towered mural crown.
The reverse depicts a Tyche in a frontal position, dressed a long garment and a bushel on her head. She is looking to the left, holding a cornucopia in her left arm and a rudder in her right hand. The depiction is framed by the legend ΑΔΡΑΜVΤΗΝΩΝ, revealing the coin was minted in Adramyteum.
This coin (CN 14447) is matched to Type 2689, which is verified by three examples in our database. Stylistically, v. Fritz dated the Type in the second half of the 2nd century AD. A bit later, around 200 AD, he also dated another coin (CN 14448) from the Berlin coin cabinet showing the same image, which is the only one matched to Type 2690.
The bust of a city goddess with the joint legend ΘΗΒH ΑΔΡΑΜVΤΗΝΩΝ can be found on a third coin (CN 14459) depicting a portrait of Severus Alexander on its obverse. Because of the emperor’s portrait this type (2688) can be dated between 222 and 235 AD.
Adramyteum established a relationship to the city of Thebe with these three coin types. The reiterations make this appear quite relevant.
It has been suggested to connect this motif to the abandonment of Adramyttium as a harbour city. Later, the city resettled in the area of present days Edremit; but recent excavations show the resettlement took place not earlier than in medieval times. The message of the coin was a different one: Thebe was the main city of the plane in Homeric times. It became famous through the Iliad, in which it appears in two important key scenes:
The wrath of Achilles, in the beginning of the Iliad, is based on the fact that he not only wasn’t allowed his loot after the conquest of Thebe and Lyrnessos but give it to Agamemnon. He complained to his mother Thetis:


I 366 Then with heavy moaning spoke swift-footed Achilles to her: "You know. Why then should I tell the tale to you who knows all? We went forth to Thebe, the sacred city of Eetion, and laid it waste, and brought here all the spoil. …”


II 691 For he lay in idleness among the ships, the swift-footed, goodly Achilles, in wrath because of the fair-haired girl Briseïs, whom he had taken out of Lyrnessus after sore toil, when he wasted Lyrnessus and the walls of Thebe, …

The most famous paradigm of the „farewell of a soldier” is Andromache’s lament when Hector prepares for the fight against Achilles:


VI 397: …, there came running to meet him his bounteous wife, Andromache, daughter of great-hearted Eëtion, Eëtion that dwelt beneath wooded Placus, in Thebe under Placus, and was lord over the men of Cilicia; for it was his daughter that bronze-harnessed Hector had to wife.

VI 416 Andromache: "My father verily goodly Achilles slew, for utterly laid he waste the well-peopled city of the Cilicians, even Thebe of lofty gates. He slew Eëtion, yet he despoiled him not, for his soul had awe of that; …

XXII 479 Andromache: …: "Ah Hector, woe is me! to one fate, it seemeth, were we born, both of us twain, thou in Troy in the house of Priam, and I in Thebe beneath wooded Placus in the house of Eetion, who reared me when I was a babe, hapless father of a cruel-fated child; …

Homer belonged to the canon of knowledge during the Roman Imperial Period and the above sections were known to every educated Greek and Roman. The Augustan Geographer Strabon names precisely these sections and points out the (at that time) abandoned city of Thebe. Because of his specifications it is plausible to locate Thebe just above present day Edremit. An exact location of Thebe still remains unclear. Perhaps it was located on a hill about 2 km northeast of Edremit, where remains of settlements were found. Thebe as a mint can so far only be proven by three little bronze types stemming from the 4th century AD (3417, 3938, 6862). They depict a female head in two varieties (Demeter, Persephone?) on the obverse and on the reverse a triskelion or protomes of a winged horse with the following legend: ΘΗΒ(Α).
Adramyteum’s coins indicate that it might have been the main city in the „plane of Thebe“, which Thebe used to be in Homeric times. The city’s namesake Adramas reveals its Lydian past, but the Homerian reference to Thebe reaches back even further and illustrates the city’s pride to live in an old cultural landscape as a part of the Greek Koiné.
The Iliad by Homer, translated by Augustus Taber Murray (1924): https://en.wikisource.org/wiki/The_Iliad_(Murray)