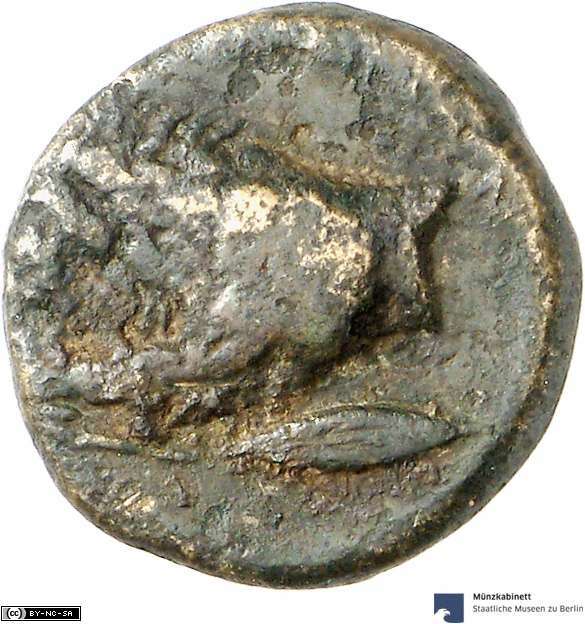 The coinage of Kardia on Thacian Chersones has been studied in detail by Julia Tzvetkova (Archaeologia Bulgarica 13, 2009, 1, 33-54). According to her study there a three different nominals in the bronze coinage of the city. It has been minted only just from the middle of the 4th c. BC until the destruction of Kardia by Lysimachus in 309 BC. Main motifs of the coinage are a lion breaking a spear in his jaws as well as images related to the production of grain—such as ears, corns, or the head of the goddess Demeter.

Our type of the month shows on the obverse a profile head of Demeter. The identification of the goddess is derived from other coin images of Kardia. On the picture here she is not wearing any symbols like an ear-wreath that could help to name her. The reverse is occupied by a protome of a lion crouching to left beneath a grain corn. Fitting to the motif of the half lion the nominal of this type is the second largest nominal of the coinage. The biggest shows the complete lion the smallest its head (but sometimes also the complete lion walking...). An interesting interpretation of badly preserved coins of this type can be found in the publication of Moushmov (Ancient Coins of the Balkan Peninsula and the Coins of the Bulgarian Monarchs, 1912, No. 5487) where this image is interpreted as a human heart referring to the city’s name Kardia.

As other cities on the Chersones Kardia minted only bronze coins with it’s own name. It is broadly supposed that the silver currency showing also a lion and lots of different symbols in the quadratum incusum of the reverse has been produced in Kardia and served as a kind of single currency for the whole peninsula.