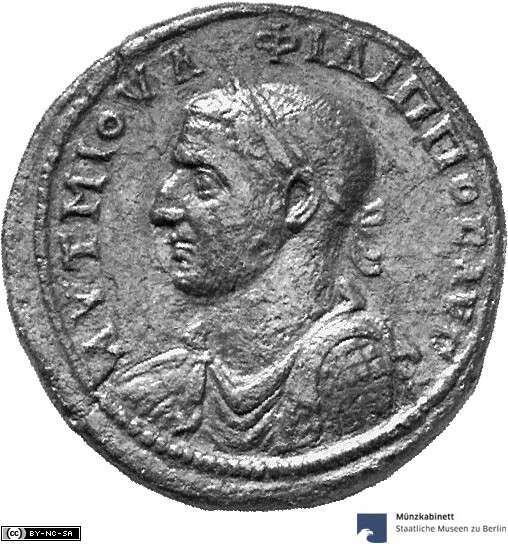 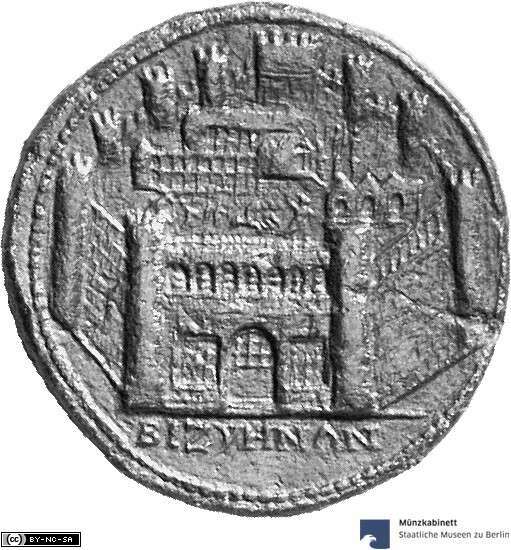 During the reign of Philip the Arab (244-249 AD) Bizye issued some medallions showing an overall view of the city on their reverses. Bizye is a Thracian inland city, located south of the Strandza Mountains, which minted coins in Imperial times. The minting of coins in Bizye reached its peak during the reign of Philip the Arab and his son Philip the Younger. Its coinage has been studied by Jordanka Jurukova who edited a catalogue of dies.

One of those medallions has been chosen as our type of the month. On the obverse we can see a laureate and draped bust of the emperor Philip the Arab to left, accompanied by the legend ΑVΤ Μ ΙΟVΛ ΦΙΛΙΠΠΟϹ ΑVΓ. The reverse presents an overall view of the city of Bizye, shown from an aerial perspective. We can identify city walls, ten towers and a city gate, which is flanked by two towers. Above the city gate one can discern a gallery consisting of seven arches and a quadriga to right, which is flanked by two uncertain figures, as ornamentation of the pediment. Inside the walls of Bizye two basilicae are depicted on the left hand side and three victory columns on the right hand side. Additionally, we can see three further undefined buildings in the right corner of the composition. The legend ΒΙΖVΗΝΩΝ in the exergue mentions the minting authority.

The iconography refers to some other coin types showing the city gate of Bizye flanked by two towers and surmounted by a quadriga with a figure inside. However, an overall view of a city seen from an aerial perspective is a unique feature in ancient numismatics and has to be considered as a particularity of the coinage of Bizye. There is another coin type with the identical iconography on its reverse, but with a laureate and draped bust to right on its obverse.