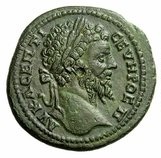 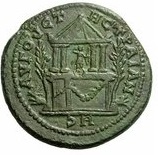 The coin type we would like to present to you this month was minted in the ancient polis of Augusta Traiana. This city received its name from Hadrian, who was eager to honor his predecessor and alleged adoptive father Trajan. Augusta Traiana minted coins during the Imperial times, starting with the reign of Marcus Aurelius. Its coinage was intensely studied by Edith Schönert-Geiss, who edited a comprehensive catalogue of the coinage of Augusta Traiana. This catalogue is replenished by Mariana Minkova who edited a supplementum on the coinage of this polis.
This coin type was issued during the reign of Septimius Severus and belongs to the biggest denomination (29 mm, ca. 12g). Its obverse shows the laureate and cuirassed head of the emperor to right, accompanied by the legend ΑV Κ Λ CЄΠΤΙ CЄVΗΡΟC Π. The reverse of this coin type depicts a tetrastyle temple on a high base with a cult-statue of Artemis inside. The pediment of the temple is decorated with a shield. Artemis is depicted quite conventionally: She holds a bow in her left hand and draws an arrow from the quiver at her shoulder with her right hand; at her feet we discern a hound, which is one of the typical animals associated with Artemis. Next to the temple we see two trees and different animals leaping behind them. The reverse of this coin type bears the legend ΑVΓΟVCΤΗC ΤΡΑΙΑΝΗC , which names the minting authority.
According to the coinage of Augusta Traiana, Artemis seems to be an extremely popular deity in this ancient polis, since she appears in large numbers on the coins minted there. On this coin type she is unambiguously identified with hunting, which might have been an attractive activity of the inhabitants of Augusta Traiana in the mountains of the surrounding area. Moreover, Artemis is likewise of some local importance, since she seems to be the interpretatio Romana of the Thracian goddess Bendis, an indigene goddess of hunting.