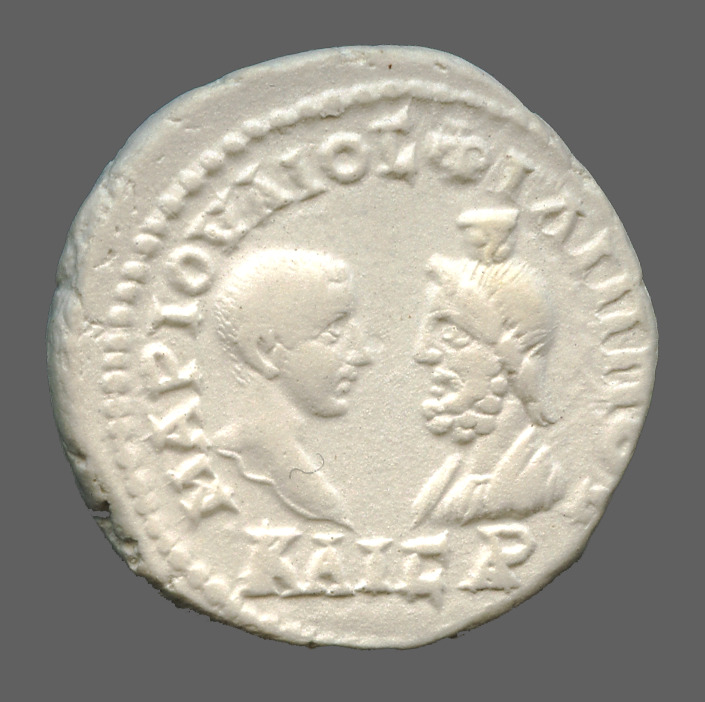 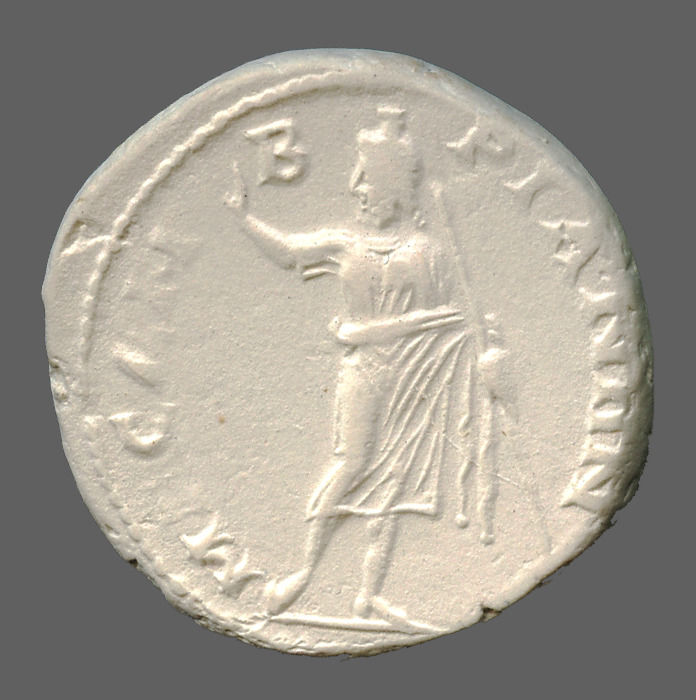 The coin type was minted in the ancient polis of Mesembria (modern Nesebar – a major
seaside resort) at the Western Black Sea coast (of Bulgaria). The city – a Dorian colony at the
Pontos – minted in the autonomous period as well as in Imperial times. The coin was issued
during the reign of the Emperor Philipp the Arab with whom the coinage of Mesembria
ended. On the obverse we see two confronting busts: on the left side it is the bare head of
the son of the emperor, Philipp the Younger. He was seven years old when his father
became Roman emperor and he was appointed Caesar in 244. In 247 he became Augustus
but shortly after the death of his father in 249 he was murdered by the Praetorian Guard. On
the right side – face to face with the bust of Philipp II – we see the draped bust of the god
Serapis wearing a kalathos.
The fact that we see Gordian III or Philipp the younger and Serapis on the obverse is a
regional phenomenon in the Balkan area. Coins showing Gordian and Serapis on the obverse
were issued only in Dionysopolis, Marcianopolis and Odessus; coins with Philipp II and
Serapis are attested in Marcianopolis, Tomis and Mesembria.
On the coin from the British Museum (a plaster cast of which is shown here) Serapis is
depicted also on the reverse. The conventional iconography shows the god standing, facing,
with a kalathos and a raised right hand. In his left hand he holds a sceptre, usually across the
body or upon the shoulder.
After the campaign of Alexander the Great the Egyptian cults had become widespread and
enjoyed increasing popularity. In Mesembria the cult of the Hellenistic Egyptian god Serapis
was already introduced in the 2 nd century BC and obviously in that time there had been even
a temple for this deity.
The Egyptian deities became even more widespread and prominent in the Roman Empire.
But while the coin types with Isis are only very few known at the Black see coast there is a
big quantity of provincial coins with Serapis in the Moesian and Thracian cities at the Pontos.
The great popularity of Serapis on the coins of Thracian and Moesian Pontic cities is certainly
due to the Hellenistic tradition and to the fact that in the 2nd and 3rd centuries AD Serapis
was the god of victory and the protector of war. Furthermore its character facilitated the
syncretism with local deities.