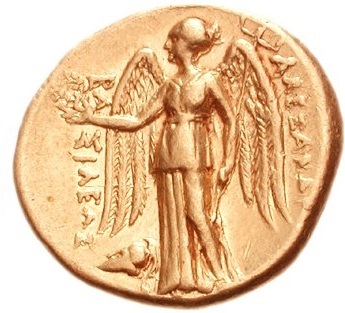 As type of the month we have chosen a gold stater minted in the ancient polis of Mesembria in the second half of the 3rd century BC. Mesembria is one of very few Thracian cities who issued coins in the autonomous period as well as during the Roman Empire. Whereas a huge amount of coins of bronze and silver have been issued in Mesembria, gold staters are still considered to be a rarity. The coin representing our type of the month belongs to the so-called “posthumous issues” of Alexander the Great, which means that it was issued after the death of the Macedonian ruler. Up to now, fourteen Alexander type staters are known, belonging to three different types, which can only be distinguished by the reading of the legend on the revers. The obverse is filled by Athena’s head to right, wearing a crested Corinthian helmet decorated with a serpent with erected head. On this specimen it is recognizable that the goddess wears an earring and a necklace. The iconography of Athena’s head with a crested Corinthian helmet is well known from Mesembrian silver coinage issued during the Classical era. On the revers we can identify the winged Nike standing left. The goddess of victory is seen in 3/4 face and is depicted, as usual, in a long garment. She holds a laurel wreath in her outstretched right hand and a stylis in her left arm. On the lower part of the left field we can see a small crested Corinthian helmet to left, which is a local emblem of the polis of Mesembria, renowned from Mesembrian tetradrachms such as the obverse of many bronze and silver coins minted in the Classical and Hellenistic era. This symbol is likely to refer to the hero Melsas, the mythical founder of Mesembria. The revers iconography is accompanied by the legend ΒΑΣΙΛΕΩΣ ΑΛΕΞΑΝΔΡΟΥ with ΒΑΣΙΛΕΩΣ standing on the left hand side and ΑΛΕΞΑΝΔΡΟΥ on the right hand side. Apart from the “posthumous issues” of Alexander the Great, Mesembria issued some more gold staters, which belong to the so-called Lysimachos type and have a different iconography on both sides.