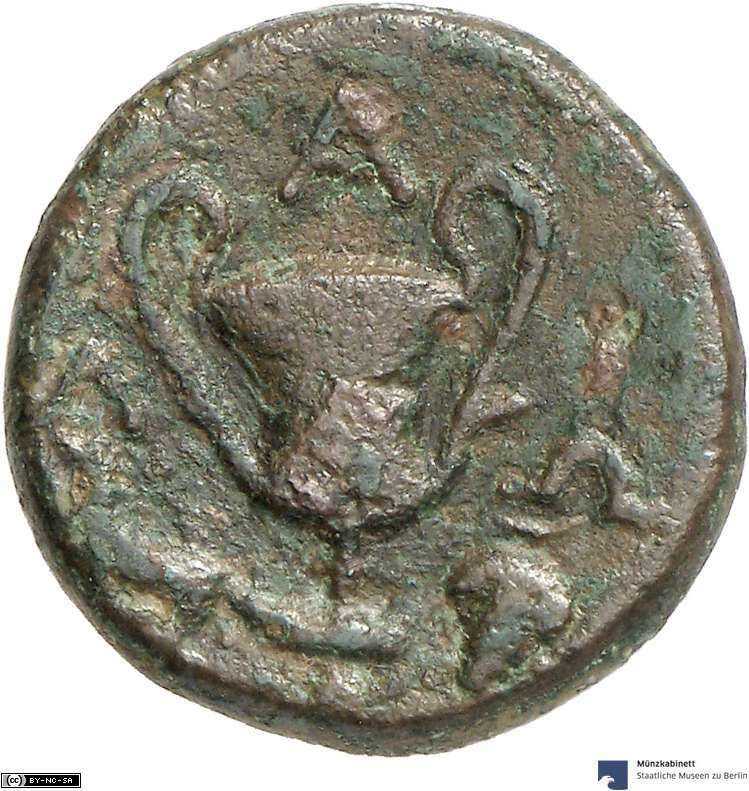 Alopekonnesos is located on the western side of the Thracian Chersonese and issued a few bronze coins in the period between 400 and 250 BC. Its coinage has been studied by Ural Yarkin, who published an article on the city’s series in the Numismatic Chronicle of 1978. According to Stephanos of Byzantium, the fox (Greek ἀλώπηξ) in the name refers to a founding oracle to settle where young foxes were to be discovered. The name of the city is also reflected in the imagery of its coinage, partly showing a fox.
Our Type of the Month comes from the first minting period of the city. The common feature of all coins of this era is the abbreviation of the city’s name ΑΛΩ on the reverse. The general picture of this type is showing on its obverse the head of youthful Dionysos wearing an ivy wreath to right. This head sometimes also is described as maenad. The reverse depicts a cantharus. The type is here represented by coin CNT_3748. Some subtypes can be distinguished by symbols on the reverse above, left or right of the cantharus. Our type depicts a vessel in the center flanked on the left by a fox standing to the left and a grape on the right.
In later periods the fox also appears as the main motif on the reverses, as well as a bunch of grapes. On the obverses we detect also the heads of Apollon, Demeter/Persephone and Athena. The city’s name on the back is given in the second group in more detail ΑΛΩΠΕΚΟΝ or ΑΛΩΠΕΚΟΝΝΗΣΙΩΝ. The types of the bronze coinage of Alopekonnesos refer mostly to the environment of Dionysus.