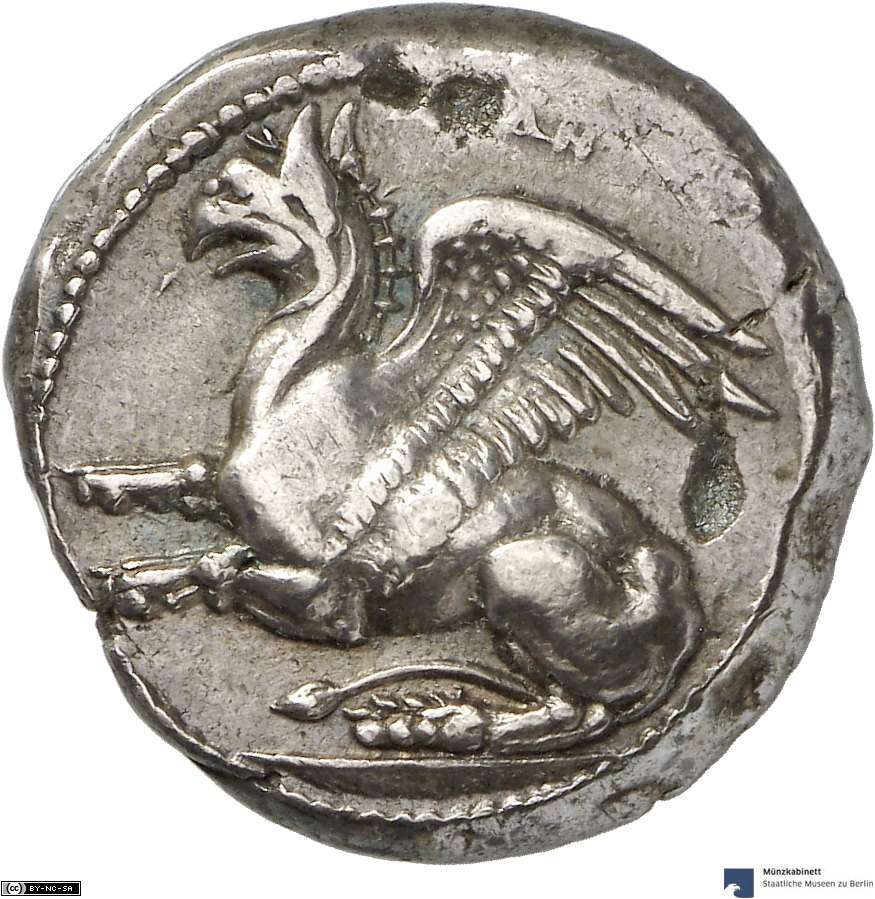 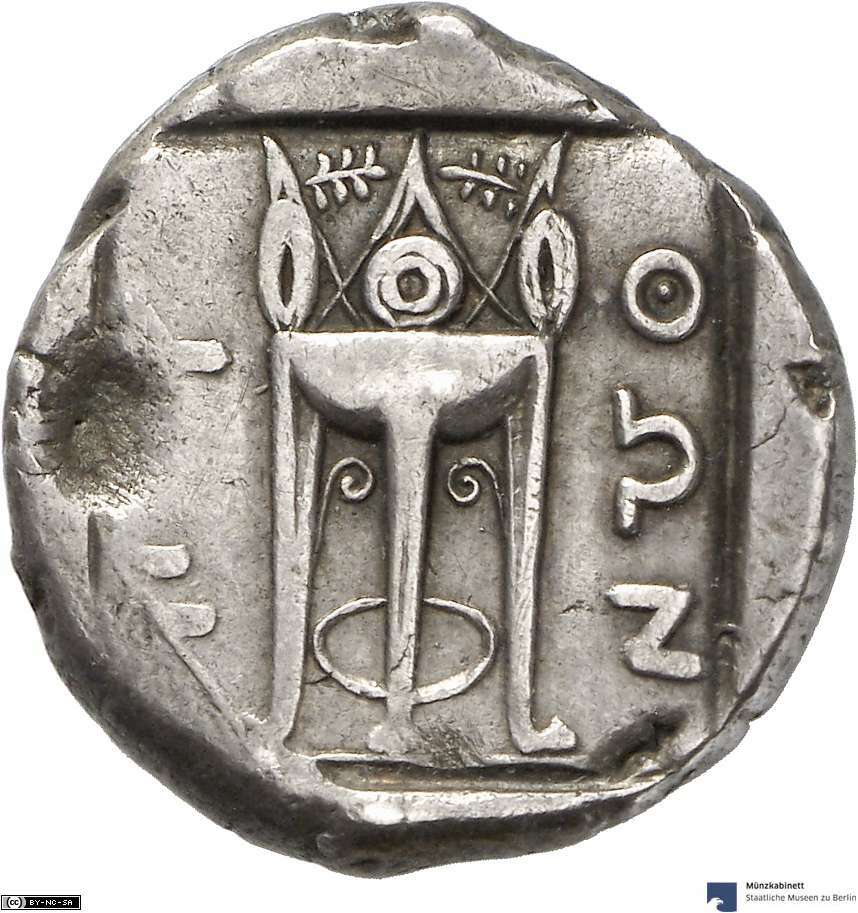 On this Abderitan Stater of the Münzkabinett, Berlin, dating c. 395-360 BC following May (new dating by Chryssanthaki-Nagle 368 BC), the characteristic obverse symbol of the city the griffin appears leaping l., forepart and forelegs raised, with feathered wings, tail under hind legs and open beak. The reverse is showing a tripod on both sides of which the magistrate’s name ΠΥ-ΘΩΝ is written. While the griffin remains the obverse sign in Abdera for a long period the reverse symbols often change and are usually accompanied by a magistrate’s name. The interplay of these symbols and the magistrate’s names has been the subject of many considerations. The correlation of image and writing on coins is for my own research of special interest. That’s why I want to summarize this month the thoughts of numismatic scholars on this phenomenon in the coinage of Abdera. Already in the Beschreibung of 1888, the catalogue of the holdings of the coin cabinet in Berlin, Alfred Sallet notes that some of the reverse images seem to be an illustration of the magistrate’s names. In 1912 Max L. Strack in the Berlin series ‘Die antiken Münzen von Thrakien II 1, 1’ says that the names and signs on the reverses of the coins of Abdera are able to give important hints to the otherwise mostly unknown sphere of ancient Greek heraldry. He gives a list of canting badges containing among others our Coin of the Month. Strack is wondering whether these badges have a long family tradition, are only the personal badges of the magistrates or were just chosen from them for the pictures of the coins. In his list we find a magistrate NIKOSTRATOS with the picture of an attacking warrior, DIONYSAS with a head of Dionysus, EUAGON with a price amphora, epi MOLPAGOREO with a dancing girl and epi TELEMAXOU with a depiction of Heracles as archer. Most interestingly PROTES has two images a galloping horseman and a head with laurel wreath both fitting for his name. Strack categorizes the correlations between all (not only the canting) names and images in four groups (1) same or similar picture for one magistrate, (2) variable images for the same magistrate, (3) variable images for the same name meaning eventually not the same person, (4) same image for different magistrates. For the last group he counts the most examples and this leads him to resume that there are no personal or family devices on coins in Abdera. Strack refers the pictures were just chosen for the coins and not used in other contexts; sometimes they have a connection with the name of the magistrate. May in his die study of the coinage of Abdera is very careful in the interpretation of the interplay of names and symbols and is using them mainly for arranging the chronology. Nevertheless he observes a lot of these correlations and is taking them as plays with allusions. And in the most recent publication Katerina Chryssanthaki-Nagle states that the various iconographic types of the reverses facilitated the administration and control of the mint. Despite they show sometimes ‘types parlant’ she is summing up that the images stay official signs of the city of Abdera and not of an individual person.
Our Coin of the month is playing with the name Python a cognomen of Apollo and his best known attribute the tripod.
If you want to share with the CNT community some thoughts on a very special Thracian coin (which should be included in our database) just write an email to peter@bbaw.de or a.berthold@smb.spk-berlin.de.