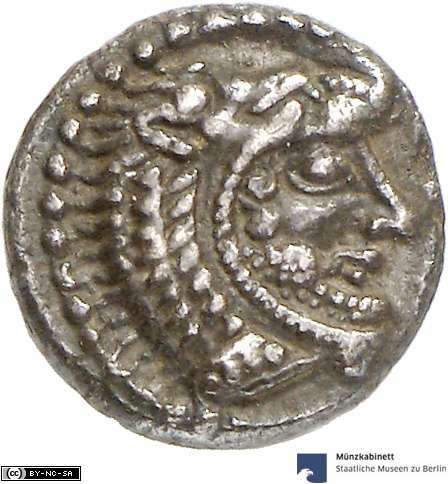 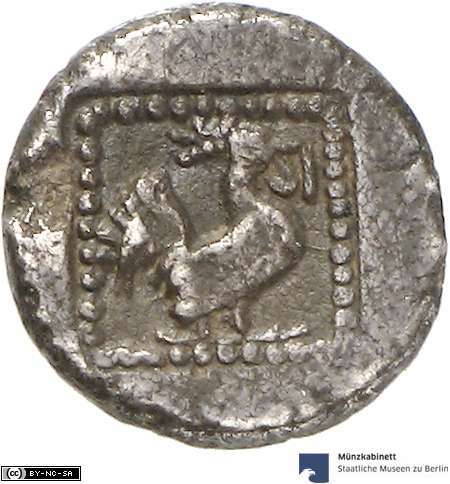 The Coin of this Month is presented by Georgia Bousia, CNT Team

For the first month of this year we have chosen a triobol of the Thracian city Dikaia, with the hope that this year will bring more justice to the world. According to Stephanos of Byzantium the city was founded by Dikaios (in Greek meaning Fair), the son of Poseidon. The identification of Dikaia, which is often confused with the Macedonian Dikaia in the Thermaic Gulf, is still controversial; however it has been accepted that the site should be located between Abdera and Maroneia, south-east of Lake Bistonis and north-east of the gulf of Porto Lagos (archaeological site of Katsamakia). Its geographical location close to a large and safe natural harbour, the discovery of its coins in distant areas like Egypt, dated on the second half of the 6th century BC, and the imported pottery from Attica, Corinth and Rhodes indicate that the city was an important commercial centre at least in the Classical Period. The silver coins of Dikaia can be dated from the late 6th century to the first quarter of the 5th century BC. They were struck on the Thraco-Macedonian system and they were using the standards of neighbour cities, such as Thasos, and Maroneia later on. It seems that Dikaia ceased minting coins after the retreat of the Persians and the integration of the city in the First Athenian League. Since then and until the Roman Period there is no information about the city. Our coin of the month shows a typical iconographical subject of the coinage of Dikaia, namely the head of Heracles with the lion skin on the obverse and the rooster on the reverse without the inscription of the Ethicon. The choice of these symbols can be interpreted in different ways. Heracles has presumably to do with the hero’s activity in the region. While the presence of the rooster is most probably connected with the Thracian god Ares and can very well be traced to the coinage of other cities in the North Aegean and the wider area. The subject but even more the depiction of the figures in archaic style is surprising, if we consider that already in the early 5th century B.C. a more realistic rendering of human and animal forms is attempted. Due to lack of knowledge on the founding history of the city and the similarities between the coins of Dikaia and those of Samos some scholars believed that the city may have been built by Samians, while others ascribed the establishment of the city to Thasians. Although this may not yet be proved, the finds and coins of Dikaia indicate an obvious Ionian influence on the area.
If you want to share with the CNT community some thoughts on a very special Thracian coin (which should be included in our database) just write an email to peter@bbaw.de or a.berthold@smb.spk-berlin.de.