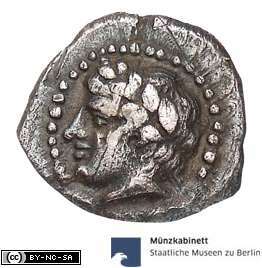 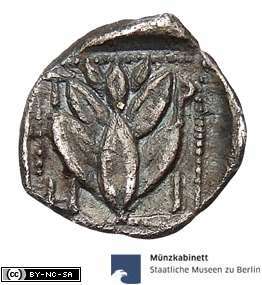 
The coin of this month is a representative of a small cities coinage only known by this silver coins. Usually the city is located between the Chalikidiki and Maroneia, because most of the known examples come from there.

Seven coins with the inscription TRIH respectively TRIE on the reverses are now on the web database of the Berlin Coin Cabinet (IKMK) and in CNT. The question of the name of the city, which struck these coins, is still not absolutely clear. Mostly it is identified as Trieros. All coins are in the small nominal of hemiobol. Typically they show on the obverse the head of Apollon or the forepart of a horse. The reverses illustrate a laurel branch inside of a quadratum incusum or only the inscription TRIH respectively TRIE inside the quadratum incusum.